It was Wayne's world in Waynesville as THE FLAMING LIPS closed out the inaugural Bellwether Fest with a bang! 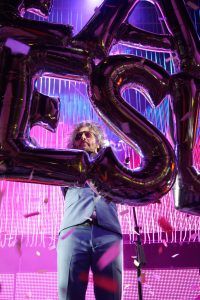 From the superb line up to the place crawling with friendly volunteers to the ever important abundance of clean porta potties, I would deem the Bellwether Music Festival a great success!

If you've ever been the the Ohio Renaissance Festival, Bellwether is held on the fairgrounds. It's a remarkably easy drive, just one hour from Columbus. With two nights of amazing bands and camping under an open sky, this is a kid friendly event you won't want to miss next year. 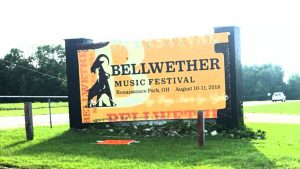 Okay, so I have to tell you the truth. My eight year old daughter was suppose to be my date for our first ever mother daughter festival and camp out weekend, but she ditched me last minute for a weekend of video game bingeing with her dad. That coupled with the fact that it was storming Friday night, my old ass stayed home, drank wine, and did laundry. Music festivals and mud go hand in hand, but camping alone in the rain didn't sound like much fun.

So sadly I missed the entire Friday line up, but was especially sad to miss Dr. Dog, Local Natives, and MGMT. And unfortunately the people who did make it Friday didn't get to see MGMT either because their set was cancelled due to lightning.

Though Bellwether has a rain or shine no refund policy, they were more than accommodating to Friday night ticket holders. Because of the cancellation of the headliner, they were given free admission Saturday night and a free or discounted admission for next year. I can't remember exactly, but it was more than generous. Well done to whomever made that decision!! Upon my arrival Saturday, there was a guy at the box office presenting his wristband from the night before that they allowed in for free with no hassle. So I saw them honoring their word first hand.

I woke up Saturday morning totally pumped to go recharge my soul listening to great music and breathing fresh air tainted only by clouds of marijuana. But the radar was giving me news I didn't want to hear. There was going to be rain over Waynesville for 3 hours of the afternoon. A younger me wouldn't even think to check the weather let alone plan around it.

I decided to wait and go once the rain passed. This time I missed The Cordial Sins, Speaking Suns, Erika Wennerstrom (of Heartless Bastards), and Allah-Las. This sucks because, for me, going to shows and festivals is as much about hearing someone new (to me) as it is about hearing the bands with whom I'm already familiar. 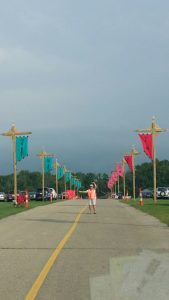 On the drive down, the sky teased with ominous clouds looking like they could dump at any time. But they didn't. From the entrance, parking lot, box office, and gate there were smiling volunteers directing festival goers every step of the way.

Just past the gate was the air conditioned first aid and mommy station. How great is that? Though I didn't have any of my four kids with me, I appreciated the consideration none the less. 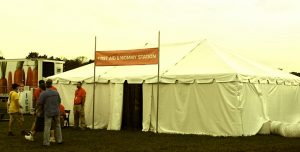 And where does one go first upon entering a festival? The beer tent, of course! Oh wait, I'm old. My path was a bee-line to the porta potties. I walked straight through a huge open field, past a large covered seating area, the Sunset Stage waaay to the left and the Sunrise Stage waaay to the right, a line up across the back of cool vendors to the john. There was no wait as there were plenty and they were shockingly clean for the second day of a festival. Whew!! 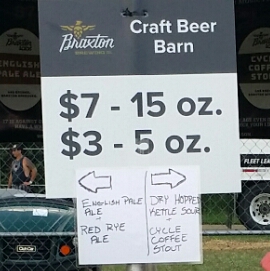 And then, BEER!! I wasn't there to get buzzed as I had to drive home, but if I was, these prices wouldn't put me in the poor house. This was great beer at a reasonable price. And what's more important than that? The music! 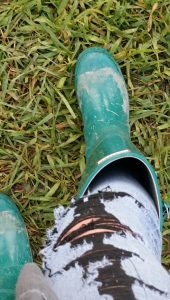 Beer in hand, I walked through the soggy field past volunteers spreading straw over every inch of mud. I joined the crowd at the Sunrise Stage just in time to hear Japanese Breakfast cover The Cranberries Zombie.

I left their set a bit early to check out the vendors and people watch, which is always part of the fun of these events. It was quite an eclectic crowd. I anticipated being one of the oldest folks there, as I usually am at shows, but I didn't take into account just how long The Flaming Lips, The Psychedelic Furs, and Echo & the Bunnymen have been around.

Now at the opposite end of the festival near the Sunset Stage, the Japanese Breakfast set had ended and it was an interesting visual to see the herd of people turn and walk from one stage across the field towards me.

The VIP tent was to the right of the Sunset Stage. I didn't have a pass, but am curious to know what it was like. Typically I would spring for the added expense (if reasonable) to avoid ridiculously long beer lines or deplorable bathroom conditions, but it wasn't necessary here.

The Psychedelic Furs put on a solid set after which I walked with the herd back to the Sunrise Stage for Echo & the Bunnymen. I took a spot in the crowd where I overheard a woman say, "There's the lead singer of The Flaming Lips." I looked over and there he was....maybe 25 yards back from the other side of the security fence.

I returned my attention to the stage and enjoyed a couple songs before dipping out of the crowd to smoke a cigarette as it's no longer acceptable to be a smoker. I walked over to the security fence to light up. Halfway through my cigarette, I turned around and was visibly startled by a few people standing behind me on the other side of the fence, one of which was Wayne Coyne. Embarrassed, I turned and walked away. I'm such a weirdo.

But it wouldn't be long before there was nothing between us and I wished I was tripping on acid. (No, you judgemental assholes, I don't eat acid...anymore. I'm a mom of 4 ages 1-8, a puppy, and a shrilly squeaking guinea pig. Every day of my life is like a bad acid trip.) But the colors!! There were colorful lights, and giant balloons that spelled out "FUCK YEAH WAYNESVILLE", and confetti to rival NYC NYE, and a rainbow across the entire stage, and a unicorn, and a giant pink robot, and the mesmerizing music!! It was spectacular!

So fuck YEAH Wayne Coyne and the unicorn you rode in on!! And kudos to all those who put on a fun and successful first ever Bellwether Music Festival!! 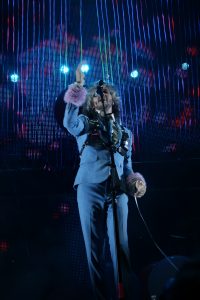 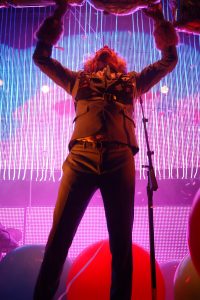 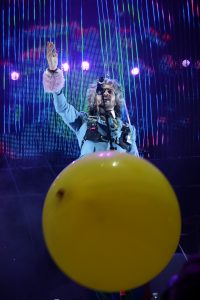