A musician undefined by genre, "Indie Lindi" Ortega has lived and played in Nashville, achieved her bucket list goal of playing the Grand Ole Opry, toured the world, and been nominated for numerous awards. With all of this accomplished, now her ultimate goal as an artist is to reach people's core making music. And that she does with her latest album Liberty. 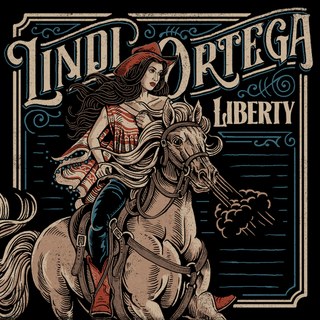 Lindi's curiosity towards music was prompted by her father's band's equipment being in their basement. He was a bass player in a Latin band. She recalls him listening to Los Lobos and Gypsy Kings records while her mother played a lot of Willie Nelson, Kris Kristofferson, Dolly Parton, and Lindi's strongest influences, Johnny Cash and Leonard Cohen.

Seeing first hand how the music industry wasn't very lucrative for her husband, Lindi's mother encouraged her to have a backup plan and go to college. So, to appease her mother, she did and obtained a degree in philosophy. She always knew that music was her passion and what she wanted to pursue professionally. Her father, being a musician himself, supported her from the beginning. It wasn't until Lindi proved herself by earning a living as a musician that her mother came around with her full support.

If I had to check a genre box for Lindi, it would be country. But not the music your hear on the radio today. The good stuff. The stuff that could never be mistaken for pop music. In a review, Neil Miller Jr. described her voice as a blend of Dolly Parton, Johnny Cash, and Emmylou Harris. Upon listening to her for the first time, a friend of mine likened her to Loretta Lynn. While Lindi associates her style mostly with Americana.

She wrote her first song at 17 after her boyfriend broke up with her the day before prom. The song is called "Faded Dress". It was the first in a long line of heartbreak songs. Twenty years and five albums later she would write a love song while engaged to her now husband. I expressed some concern that her very relatable signature style may be lost now that she is a happily married woman. But she said there is a well of pain from which to draw. She assured me it did not go away just because she got married.

Lindi describes her fifth and current album Liberty as a spaghetti western. Co-writers on the album include Aaron Raitiere, Bruce Wallace, and John Paul White. The songs go deep and she leaves the interpretation up to the listener but in general she wants the album to convey a message of hope.

My final question was, "What is one thing you always have with you on tour that isn't your husband, your band, or your guitar?" Her answer was quick, "My red boots."

Check out Lindi's new album Liberty and see her this weekend at Holler on the Hill in Indianapolis and check out the dates for her upcoming tour with Dustbowl Revival.